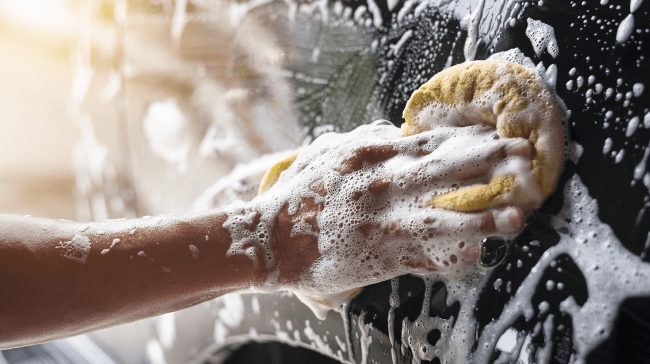 Q: I wash my vehicle at home using a garden hose. Lately, the finish looks dull and marked. What could be wrong?

A: Washing your vehicle at home is extremely harmful to the finish. The University of Texas proved that a single home hand-wash can leave scratches in your finish as deep as 1/10 of the paint’s total thickness. Also, the average garden hose cannot supply enough water and water pressure with the detergent action to avoid damaging a vehicle’s finish. This important study concluded that automobile owners should avoid washing their vehicles at home. Only a professional car wash can provide the proper amounts of water and water pressure needed along with the appropriate soaps and waxes to safely and effectively clean your vehicle.
The International Carwash Association working through a special Carwash Research Foundation Grant to the University of Texas at Arlington, Texas, has conducted extensive car washing tests this past year to determine the effect on car finishes by comparing various car washing techniques ranging from professional car washing to the bucket and sponge used by many auto owners.

Hand wash jobs are extremely harmful to automobile finishes – Tests conducted by the University of Texas to compare surface disturbances showed that a single home hand wash on an automobile can produce scratches that penetrate as deep as 1/10 of the total thickness of the automobile’s paint.

These test findings at the University of Texas substantiated tests done over ten years ago by the Technical University of Munich, Germany, in association with Mercedes-Benz, which at that time showed that similar damage was done to an automobile when using detergent, low water volume commonly found in hose nozzles c home, buckets of water, sponges and towels used in the average home car washing.

Specific scientific tests at the University of Texas further showed that hand car washing can produce so many marks on a car’s finish that they cannot even be counted. The tests showed that in all hand washing temperatures surface reflectance readings steadily declined, with some hand washing techniques being considerably worse than others. By contrast, when cars were washed by professional full service car washes, there was virtually no change in the surface reflectance or shine readings.

The tests showed that the average backyard hose is not able to supply enough water along with the detergent action to avoid damaging the car’s finish. The most harmful method of washing cars was found to be the special “car wash” brushes that hook on to a garden hose and are purchased from local hardware stores or automotive supply dealers. The use of this type of brush with the low water pressure that comes out of the garden hose is the most destructive on the finish of an automobile. The tests also showed that techniques used at professional car washes are virtually harmless to automobile finishes. Findings from the University of Texas research study indicate that with the large amounts of water and specialized detergents used in professional car washes, sophisticated gloss and reflectance meter readings from new finishes used on automobiles were virtually the same before and after the equivalent of several months of normal washings in a professional car wash.

The professional car wash is able to provide and use tremendous amounts of water along with specialized detergents and appropriate mechanical action from cloth pads and curtains which the backyard hose and bucke hand car wash is not able to supply. This important and interesting research study performed by the University of Texas found that today’s automobile owner is much wiser to have their car washed by a professional car wash, rather than washing it at home in their own backyard.

The Technical University of Munich has carried out an impartial scientific comparison test in association with Mercedes-Benz to establish the exact ranking of hand washing versus machine washing of vehicles relative to damage to paintwork.

To make the test as realistic as possible, typical family sedans were used – with a few hundred miles on the odometer. It was stipulated that each car was to receive the equivalent of one year’s wash stress (about 25 washes) – some cars by hand washing methods, others by automatic car washing equipment.

To make the test as realistic as possible, and to give both the hand washers and the automatic car washing equipment something to get clean, five test vehicles were thoroughly coated with a mixture of street dirt, under-fender dirt accumulations, oily water, and thawing-salt residue. This test mixture, inspected under a microscope, contained grit particles measuring between 0.5mm and 1.0mm which are enough to damage the toughest paintwork if not carefully removed.

Without having been told the why’s or the wherefore’s, four men were given the chore of washing four of the tes cars by hand. Each person was to do as thorough a job as possible. Since there were four people involved, and since each person used their favorite “tools”, together they presented a cross-section of various hand washing techniques commonly used by average car owners.

So the marathon carwash began. The four men showed up in four different sections of town enthusiastically sponging and lathering their test cars as if they were their very own. Bystanders could see one man hard at wort in a do-it-yourself self-service type of car wash with high-pressure water facilities; another was busy at home with the garden hose and a water spray-brush. One man scrubbed away utilizing a bucket, a sponge, and a garden hose. One, to the horror of the environmentalists, and in defiance of local regulations, washed his test car at a lakeside.

As the alternative to the perspiring hand washers, automatic car washing equipment was used to wash the fifth test car. To keep the test above board, the test vehicle arrived unannounced during the hours when the car wash was open for business. The car was washed along with other cars.

To measure the extent of paintwork damage, microscopes were available. However, pure reflecting microscopy, as well as electron microscopy results merely in a visual picture of scratches. A comparable measure of true depth cannot thus be achieved. Consequently, a method of analysis was used which could determine the exact depth of the scratches and grooves, namely, the interference-microscopic analysis method.

This method allows the glossy surface, with all of its irregularities to appear like a relief map. An interference band is created and corresponds to the contours. Band distances are 0.27 of one thousandth of a millimeter, thereby allowing even the tiniest grooves and scratches on the gloss to be accurately measured and compared.

The comparison tests produced results of which every car owner should be aware. Automatic car washing and hand washing have completely different effects on automobile paint.

How does the paintwork of a car appear after 25 washes – equivalent of a year’s worth of washing?

The results are depressing, at least to the car owner who, up to now, has firmly believed in hand washing. The deepest scratches after hand washing had a depth of more than onetenth of the paint surface. Under the microscope, the paintwork looked like a cratered landscape. The paintwork was deeply scored and scratched -the result of dirt and trapped sand particles.

In hand washing, invariably too little water is used. Even with a garden hose and a sponge technique, small sanc particles lodge themselves firmly in the fine pores of the sponge or wash mitt and cannot be removed even by good rinsing. Such particles work on the paint surface like sanding discs. Furthermore, the hand washings produced a tangle of uneven scratches in the paint surface.

By comparison, the surfaces of the test vehicle washed with automatic car washing equipment appeared different. Compared with the hand washed surfaces, it was remarkably smooth, with many very fine markings virtually parallel and uniform – less than .0003mm – the result of evenly moving and rotating cloth pads and curtains. The machine-washed surfaces were in very good condition after 25 washes.

Wash a car by hand or by machine, in either case, it looks immaculate right after the wash. The sophisticated tes described suggests that looks are deceiving: The paintwork on a car washed by automatic car washing equipment is in much better condition than one washed by hand – even though the car owner lavishes tender, loving care on their vehicle.
Eventually, either by force of habit or because the car finish looks dull, the weekend hand washer resorts to the lengthy and back-breaking chore of applying abrasive rubbing compound or similar pastes and liquids to their vehicle. This process indeed restores the luster to the finish. Such “pampered” cars naturally appear to have just rolled out of the showroom. The proud motorist forgets the long hours with the rubbing compound, and is probably unaware that the reason for all that work (to get the scratches out) was their energetic hand washing procedure on previous weekends.

On the other hand, the motorist who uses the services of a professional car wash with their automatic car washing equipment subjects the paintwork of their vehicle to the thorough, but gentle action of cloth pads and curtains which treat their paint job with tender, loving care. Knowing that the car finish has to have some protection against the ravages of the chemicals in the air and to also provide a barrier of protection against bird droppings and other contaminants, this car owner will periodically apply a coat of wax to their vehicle. At that moment, their car looks as if it had just rolled out of the showroom.

In comparison, although both cars after washing and other treatment will look pretty much the same, a car is actually treated better (especially concerning the paint finish) by machine washing at a professional car wash and the application of wax than a car washed by hand (with the resulting need for the application of rubbing compounds, etc.). However, in the process, the car owner who utilized the services of a professional car wash has saved a great deal of time, labor, and effort.